Topics of the European Police Trainer Conference (EPTC) on Wednesday 06.03.2019 and Thursday 07.03.2019 at the Exhibition Center in Nuremberg.

Speaker: Bernd Pokojewski was involved in the development of hostage rescue tactics, active shooter combat and anti-terror tactics during his assignment as a Special Forces (SEK) Team Leader and training instructor. Furthermore he was the Commander of a Special Task Force to control street crime in Frankfurt a. M., Germany. Later in his career he served as the Chief of a close protection unit.
To date he continues to serve as a professional writer, speaker and trainer for police matters.

PiD Member since 1996. Responsible for the organization of seminars and development of PiD tactics and training.

Steve is a 32 year veteran of the North Carolina Department of Justice where he served as the Senior Firearms Instructor for the North Carolina Justice Academy. He was responsible for the training and certification of all law enforcement firearms instructors, all concealed carry firearms instructors, and all armed security firearms instructors. He has attended most major firearms manufacturer’s armorer courses, and coordinated and taught in other training programs such as a Law Enforcement Sniper Course, Submachine Gun Course, SWAT courses, etc. Steve currently serves as the Chairman of the Education & Training Committee of the North Carolina Criminal Justice Education & Training Standards Commission. He also chairs the Joint In-Service Committee that selects and approves all mandated training for all law enforcement officers in North Carolina. He also serves on the Private Protective Services Board which oversees the registration and training of all armed and unarmed security personnel in the state. Steve served as President of the International Association of Law Enforcement Firearms Instructors for sixteen years and continues to serve on the Board of Directors of IALEFI as he has since 1996.

Dr. Alan Tanovic: Hidden objects scanner for use at site of operation

Innovative technique for fast discoverage of 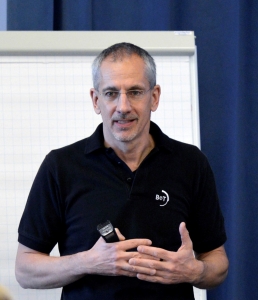 Speaker: Ralph Wilhelm, born in 1967, expert on handguns and ammunition. Initially working as a journalist for the trade journal “Deutsches Waffen-Journal”, today he is the author of more than 500 specialist publications as well as various books and lectures. In this capacity, in the mid-1990s he vehemently advocated deformation ammunition and modern police holsters. After further positions with weapons and ammunition manufacturers, he now works for B&T, a Swiss manufacturer of special weapons. In all his activities, he continues to work for meaningful and modern police equipment in the field of weapons and ammunition.

Dr. Dirk Scherp: Use of firearms in knife attack - a case analysis

Lars Lapper: G20 in Hamburg - A new form of militancy?

Speaker: Lars Lapper is a police officer and has served for over ten years in Evidence Preservation and Arrest Units (BFE). He also works as a specialist author for police publications and as a speaker. Published for magazines as well as for the Police Union and the Bavarian Ministry of the Interior. Researched the cover story of a specialist journal on police operations at the Hamburg G20 summit.

Ralph Wilhelm, born in 1967, expert on handguns and ammunition. Initially working as a journalist for the trade journal “Deutsches Waffen-Journal”, today he is the author of more than 500 specialist publications as well as various books and lectures. In this capacity, in the mid-1990s he vehemently advocated deformation ammunition and modern police holsters. After further positions with weapons and ammunition manufacturers, he now works for B&T, a Swiss manufacturer of special weapons. In all his activities, he continues to work for meaningful and modern police equipment in the field of weapons and ammunition.

Matthieu Glardon is the locum tenens head of the Centre of forensic Physics and Ballistics, were he has been working since the end of 2010.

A graduate of the School of Criminal Sciences of the Legal Faculty at the University of Lausanne, he is currently doing a PhD about the terminal and wound ballistics of the European police ammunition. He worked at the School of Criminal Sciences as a Teaching Assistant and examiner in the Firearms Group between 2008 and 2012 and holds an advisory position to the Swiss Police Technic and Informatics commission since 2013.
He is also a Force Science analyst since 2015 and has worked as a ballistics specialist for the Truth for Reconciliation Commission of Thailand, on behalf of Civilian Peacekeeping program of the Swiss Department of Foreign Affairs in June 2012.

An introduction course on wound ballistics for medicine, forensic and law students at the universities of Bern, Luzern and Lausanne are also part of his mandate at the Institute of Forensic Medicine.

Fighting in urban terrain with short and long weapons

We may request cookies to be set on your device. We use cookies to let us know when you visit our websites, how you interact with us, to enrich your user experience, and to customize your relationship with our website.

Click on the different category headings to find out more. You can also change some of your preferences. Note that blocking some types of cookies may impact your experience on our websites and the services we are able to offer.

These cookies are strictly necessary to provide you with services available through our website and to use some of its features.

Because these cookies are strictly necessary to deliver the website, refuseing them will have impact how our site functions. You always can block or delete cookies by changing your browser settings and force blocking all cookies on this website. But this will always prompt you to accept/refuse cookies when revisiting our site.

We fully respect if you want to refuse cookies but to avoid asking you again and again kindly allow us to store a cookie for that. You are free to opt out any time or opt in for other cookies to get a better experience. If you refuse cookies we will remove all set cookies in our domain.

We provide you with a list of stored cookies on your computer in our domain so you can check what we stored. Due to security reasons we are not able to show or modify cookies from other domains. You can check these in your browser security settings.

We also use different external services like Google Webfonts, Google Maps, and external Video providers. Since these providers may collect personal data like your IP address we allow you to block them here. Please be aware that this might heavily reduce the functionality and appearance of our site. Changes will take effect once you reload the page.